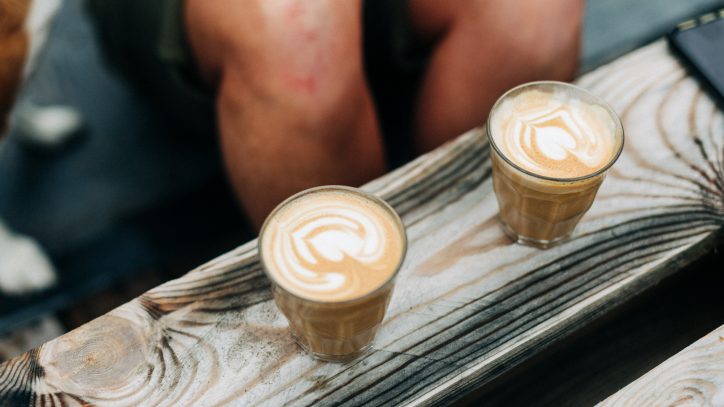 Went on a doggy coffee date with Indie and Luna to The Good Coffee Cartel. Indie likes her coffee black, whereas Luna is partial to a flat white. 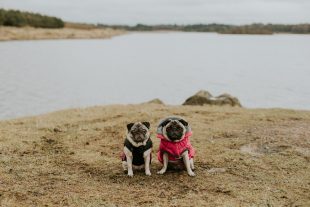 This is Ella and Macy, my friend’s dogs. They’ve had some bad news about Ella’s health and there’s a chance she won’t be here in 6 months. It’s heartbreaking. I know how much my friend loves these dogs, so I offered to do a family shoot. Now they’ll have some nice memories to look back on. Here’s a photo I took of Ella when she was a puppy. They’re both lovely dogs and I know Ella will be getting lots of cuddles. 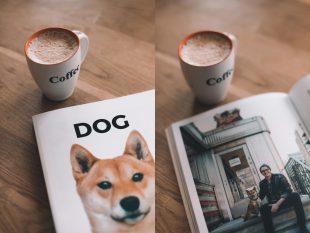 I was thrilled to find this magazine in a book shop in Manchester. It’s called Dog and is about dogs. I love browsing through it with a cup of coffee. My two favourite things! 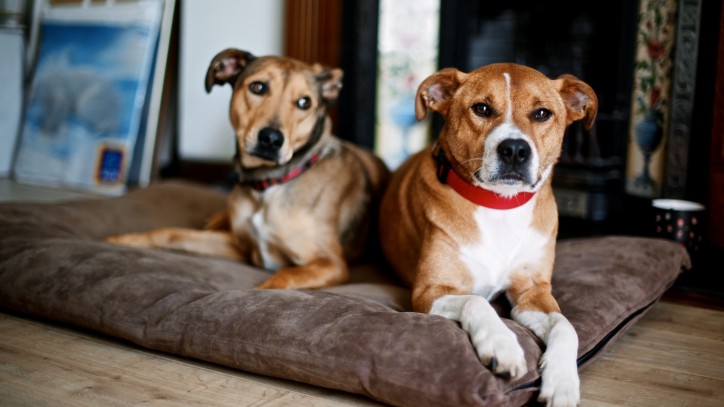 Rehoming Indie from the SSPCA was the most delightful decision of my teens. 7.5 years later and we’re still hanging out, causing chaos. In an effort to highlight the option of rehoming a dog as opposed to going straight to a breeder, I am visiting families who have rescue dogs and talking to them about their friendships with these canines. There is a bit of a stigma that rescue dogs can harbour behavioural issues, therefore the option isn’t for everyone, but these dogs can be your best friend – just like a thoroughbred whose history can be traced every step.

First up, Karen and Peter.

(Please note, I do not think there is anything wrong with going to a breeder. I am just highlighting the alternative.)

Why did you go to the Dogs Trust and SSPCA? Why didn’t you go to a breeder?

[Peter] I just didn’t think that was the done thing. When I was growing up we always had rescue dogs. I went along and just sort of started having a nosey. I think I got Jack and Sam before I met Karen, and I got Sandy within the week that we met. So, for me growing up that was sort of the done thing. We never really went to a breeder and I didn’t know much about it, so I just went and had a nosey about. Over two or three visits I went to the likes of Bothwell, Cardonald – the SSPCA places – and one day this little guy (Jack) came bounding out of the kennel, and his tail was going – he seemed really pleased to see me. I thought “That seems like a good one”.

When I went to Cardonald to rehome my dog, Indie, one of the staff told me the dog chooses you. Do you think that was the case with you?

[Peter] I don’t know. Sometimes I can see him being like that with everybody – pleased to see everybody and anybody. He has jumped inside the back of somebody else’s car before. But in that regard, I can see my personality in both of them.

You’re not too concerned with having a pedigree that you’ve raised from being a puppy?

[Peter] Not in the slightest. I always thought Jack had a big smile and personality, smart doggy. My understanding since is that pedigrees tend to have a lot of trouble.

[Karen] I just kind of figure that the start of their life hasn’t been the best and they deserve – just like anything – a chance. And it seems humane to do that.

Do you know anything about their background?

[Peter] Sandy, yes, in that his mum was in the Dog’s Trust when he was born, and he was returned 9 months later because of a change in circumstance. At the time he was the dog they could pair up in a kennel with any other because he was not fussed, happy go-lucky. And Jack… Jack was a stray.

[Karen] Which is horrible. It’s so sad. You wouldn’t do that with a child. I think people need to go through quite a strict adoption process, because you can’t decide after 9 months that you don’t want your child any more. A dog is for life, I think it’s horrendous that people can just return dogs.

[Peter] My sister was telling us that a number of people were like money’s tight and the dog gets ‘lost’ during one of their walks.

Thats horrible. So, they just found Jack on the street?

[Peter] Yeah. I always thought it was strange – and interesting – that they would take the dogs that they found in one part of the city and take them to the rescue home at the other side of the city.

Where was he found?

[Peter] I think it was somewhere like Bishopbriggs. Or maybe that was Sam, I can’t remember.

You went to both Dogs Trust and SSPCA. Was there a difference in process between those two places?

[Peter] In terms of the places, the Dogs Trust was nicer. It was kind of like the Disneyland… I don’t know if I should say that. But, you know, it was nicely designed, whereas Cardonald is more on the functional side. It doesn’t bother me either way. I know it’s nicer (Dogs Trust), but is that really going to matter to the dogs? As long as they’re comfortable and get looked after. The Dogs Trust seem to be a lot more thorough.

Do they do background checks?

[Peter] They do, but if you’ve already got a dog they don’t tend to be too fussed. I think one of the issues that they might have had with me was being on the top floor flat at the time. Given I already had Jack, they weren’t particularly fussed. The neighbour wasn’t particularly impressed, though, but hey!

Why do you think people go to a breeder instead of a rehoming centre?

[Karen] I think that they think if they’re paying £600 for a dog, they’re getting a quality dog, good background, no behavioural issues.

[Peter] New, shiny, out the box is the impression I would get, rather than something that’s a bit of this, a bit of that. But they are the way they are, and the idea of paying £600-900… I think Jack was £60 at the time. Sam was £100 because he was a pure breed labrador.

Oh, so the price at a rehoming centre depends on the breed of dog?

[Peter] Not so much the breed, but whether they’re a pedigree or not.

Indie, my dog, has been through a few homes, and I feel I’ve done something good by bringing her into mine and making that commitment. Do you feel the same with your dogs, or does that not even cross your mind? 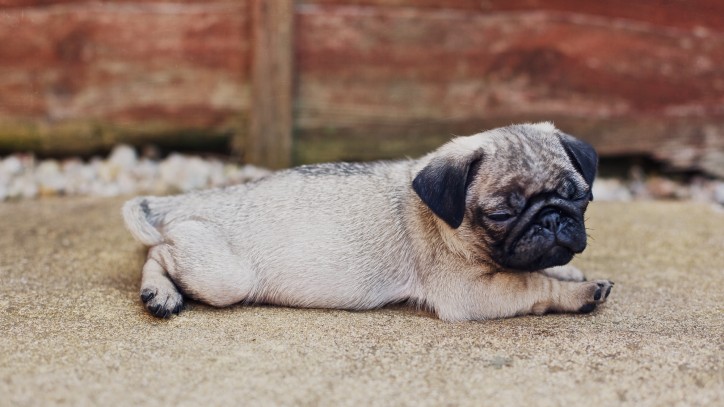 When my friends, Sheryl and John, told me they were getting another pug puppy, I just had to take photos of the new addition. It has become a bit of a tradition after photographing their other pug, Ella, when she was a puppy (who hit front page Explore on Flickr – thanks, Ella’s face!). Macy is every bit as cute as Ella, so if you can’t get enough of her there are more photos on my Facebook page. 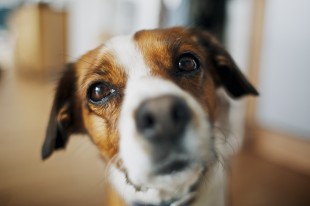 It’s been a while since I’ve papped my camera in Indie’s face – especially with the 28mm lens. I think, after 52 Weeks, I had exhausted her tolerance with the camera. Nothing entices a dog to pose quite like the promise of sausages, though. 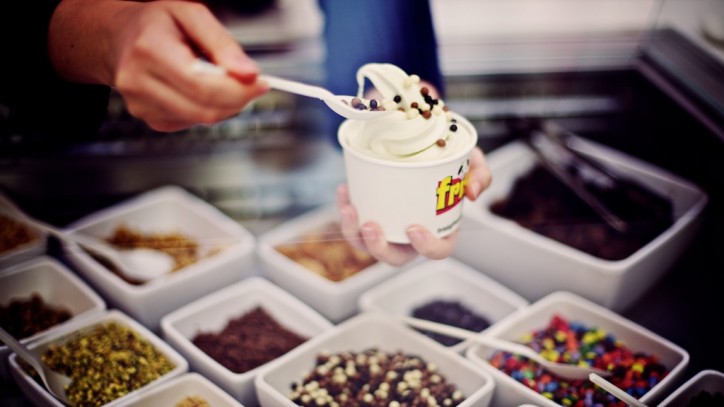 This weekend didn’t exactly turn out as planned. With The Met Office issuing an amber weather warning, I figured it was safer I give driving to Manchester a miss. All geared up for an adventure, though, I boosted to my sister’s in Edinburgh and proceeded to have one of the best weekends I’ve experienced in a while.

We also stopped off at what is becoming a regular haunt for us, The Chocolate Tree on Bruntsfield Place. They are dog friendly and do a mean hot chocolate.

That’s not all. We drank afternoon cocktails, splurged on steak sandwiches, visited a secret shoe shop (where photos were forbidden) and window shopped at vintage stores. We also did the tourist thing, spending a bit of time on Royal Mile and climbing Arthur’s Seat. A bit of indulgence followed with a lot of fresh air makes for a happy Ashley.

I like visiting Edinburgh, and after this weekend I think I’ll visit even more. 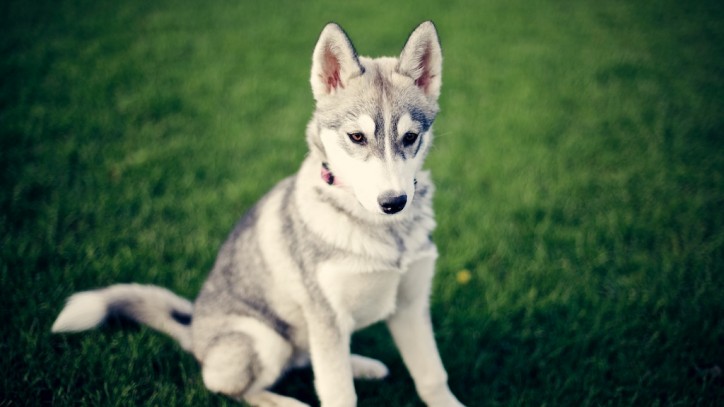 You should know by now I love my doggies, and I have no problem stopping random people to ask if I can photograph their pets (they always say yes, as opposed to what they say when you ask to photograph them). I didn’t catch their names, but I do know the pup is only 13 weeks old and both dogs aren’t related. I also know the focus is a little soft on a couple of the images (namely the one with the Spaniel humping some other dog in the background), but I’m going to let my perfectionism slide in this case as they are CUTE! 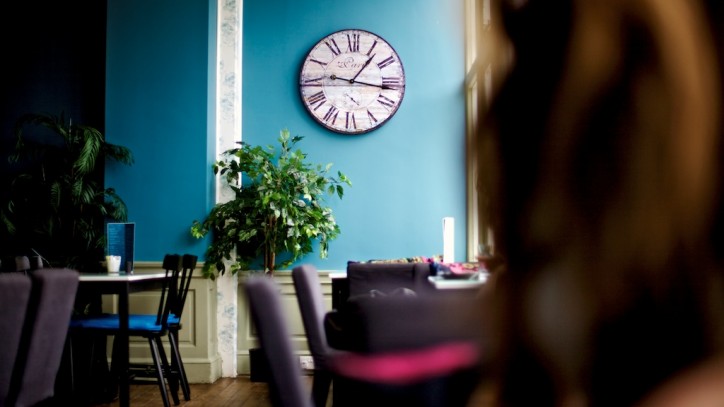 Nipped through to Edinburgh this weekend seeing as it’s less than an hour from where I now live, and I had to drop off secret files to my sister on a secret hard drive like a secret agent. Yeah. We had a sisterly couple of days together where we did more shots for our fashion blog (which I’ll be updating early next week) and had lunch at Frederick’s Coffee House on Frederick Street.

Okay, let me tell you about this coffee shop… They do white hot chocolate and white mochas, which you just have to try because white chocolate is the best chocolate. The food is good, too (next time I’ma get some cake). And the colour of the walls is the colour I’ve bought for my living room. Yaldi. 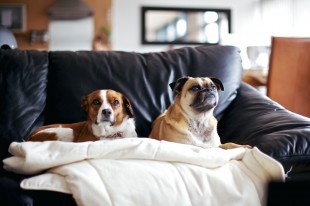 Carolyn has come and gone, and with her she took her annoying lovable pug, Malia. My dog, Indie, is on the left and they don’t get along very well. Actually, to be fair it’s my dog’s fault; she’s awfully unsociable and generally dislikes all dogs, so I was surprised to see them sitting so close.